In September 2017, Fenty Beauty was launched by Rihanna which struck a new era in the beauty industry like never before.

Rihanna released her first makeup product which was the “Pro filter foundation”  and other products such as Lip gloss, highlighters,40 foundation shades, contour stick, mattifying powders, primer, and blending sponge which won the hearts of many as it addressed the gap which existed in the beauty industry, it tackled the insufficient foundation shades which were not available for black women and women of color.

Starting a makeup brand with a foundation is brave and very risky as this is what a lot of people struggle with, finding the perfect foundation shade which helped the brand gain popularity as it met the need/ expectation of its consumers and made every woman that used the brand feel included and thought of in the creation process.

The brand did not just capture the heart of its consumers because it was owned by Rihanna, it captured the hearts of many because it lived up to its words as Rihanna stated ” Fenty beauty was made for everyone: for women of all shades, personalities, attitudes, cultures, and races. I wanted everyone to feel included, that’s the real reason I made this line.” and this has been proven by the beauty brand.

As a result of this, the brand has the heart of people as seen below

Essentials!!! , If it ain’t fenty I don’t want it 😈🤍 @rihanna @fentybeauty pic.twitter.com/8kRtQ7BQsp

A lot of people seem to love the brand because it has been the first makeup line that has met their complexion from very dark women to Albino’s as they shared their experience on Instagram. They stated that Fenty is the first makeup brand that makes them feel included as the foundation shades match their skin effortlessly.

The brand has also created “the Fenty effect” on other makeup brands to extend their shades as Fenty Beauty threw a challenge with it’s extended 50 foundation shades making it available for all women regardless of color and race.

A brown-skinned woman wearing the Fenty foundation in one of the shade range provided.

Acondria, who has very light skin holds the Fenty foundation and testifies to it in her Instagram caption.

Fenty Beauty was awarded the best invention of the year in 2017 after it made $72million in one month of sale, the brand also outpaced the earning of several makeup brands like Kylie Cosmetics, Urban Decay, MAC  and Too Faced.

It’s no lie that the brand Fenty Beauty has come to stay, as it has recorded great sales and feedback from customers in the first months and its two years of existence. More is to come but it can only get better! 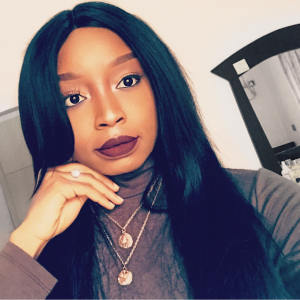 A content creator currently studying in Griffith College,Dublin Ireland. A fashion and beauty enthusiast.
All Posts