The Transatlantic Trade & Investment Partnership (TTIP): What is it?

The discussions for a Transatlantic Trade and Investment Partnership (TTIP), have been on- going between the United States and the EU since 2013.

The proposal became motionless when the 2016 United States presidential election saw President Donald Trump head of state and Washington. Since mid-2017 both US representatives and the EU resumed discussions, and promoted the potential positive impacts for all 28 members EU members and the US which consists of 50 states.

TTIP will be the most complex negotiation historically and the largest bilateral trade initiative ever negotiated.

TTIP having arrived to the economic world stage at a time when the international order is undergoing substantial change, can be reflected in the popularity of the 162 international trade agreements which were in force as of 2002.

The most significant change was the emergences of a new group of rising powers from 1990s onwards: China, Brazil, India and Russia (BRIC). BRIC seemed to grow more powerful during the global recession of 2008 whilst the west suffered substantial economic losses.

The West in the form of the first Europe and then the United States had created the international market order of the modern world and dominated it for the past 250 years. The leading powers in 2000 were the same as it had been in the 1990s, with the exception of Japan. This is very unlikely to be the case in 2100, or even in 2050 (Morin et al., 2015).

Since the collapse of the liberal international order  the world is now in transition between unipolar and multipolar world. In certain respects, the world is still unipolar, particularly in terms of military capacities (US).

This poses a major challenge for the US leadership. It raises the question of how the US can be incorporated in a stable system of multilateral governance? As the economic crash of ’08 and the sovereign debt crises in 2010-2012 pushed western economies into deflation.

The US has enjoyed this status of global leader in terms of military, ideologies and economies for 70 years. It’s political class, regardless of rising countries and multilateral governance, show no indication of abandoning their title in our governing world system.

In attempt to avoid the decline of American power and the Eurozone, the proposition of a transatlantic partnership may seem quite attractive, but with what costs to other partners?

The Transatlantic Trade Agreement and Investment Partnership (TTIP) is a valuable player in adjusting to the economic crisis, reducing the reliance on protectionism and measuring up to the impact of emerging economies like China, India and Brazil”, Karel De Gucht, European Commissioner for Trade 2010-2014.

The ‘easiest’ part of the TTIP negotiations will be the removal of duties on goods.There are other issues that are much more complex and indeed harder to address.

Mario Telo stresses how we will need strong and innovative rules on energy raw materials, sustainable development and investment protection of the EU. Also in light of today’s energy crisis TTIP could be viewed by critics as a strategic asset to the US.

If the US can guarantee unrestricted oil to the EU, it will no longer have to rely on the Russians for supply. Gucht argues that sustainable development is an integral part of TTIP. Both sides retain the right to protect labour rights or the environment, provided that they do not weaken these rules for commercial advantage.

It seems clear that of the two participating states in TIIP, The U.S. and the European Union, one is in line for greater rewards. With non-transparent negotiations TTIP needs extensive monitoring and transparency must be demanded during discussions.

Investor-state dispute settlement (ISDS) is a system through which investors can sue states for alleged discriminatory practices. This is the basis of my critical analysis of the ongoing TTIP negotiations as ISDS may have extreme impacts on all 32 states in the EU.

We must look at  TTIP in a much larger picture. It is not just a single FTA that is being discussed here.  There are numerous discussions surrounding trade agreements happening between rising states across the global.

Below you can see the scale of this new era of FTA’s. You can see how the global order is in a chaotic time. It is clear that the focus of state governance is now being directed at obtaining natural resources. Alllies both economically and in military are vital, with an emphasis on the importance of geopolitics. 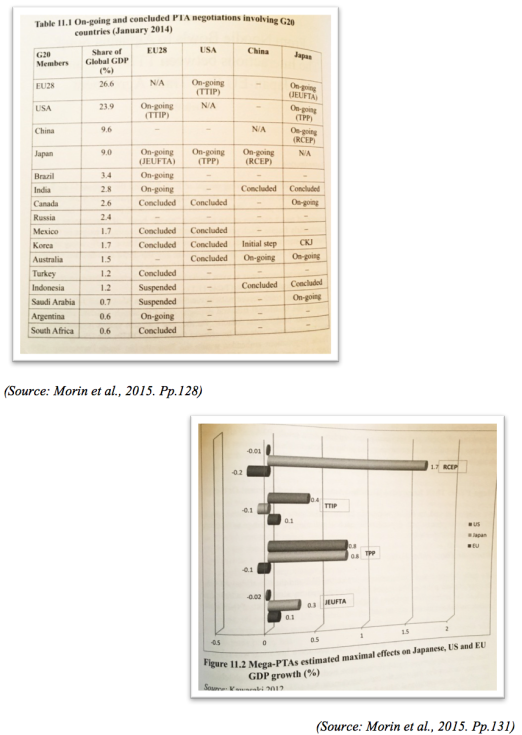 Fracking Ireland is a civil society organisation that was set up by locals of Leitrim, Roscommon and Sligo. It started between like minded, concerned citizens who are opposed to hydraulic fracturing. Through their website they have been vocal in their objections against TTIP.

Paul Melia reported for the Irish Independent in December 2016 on the matter. She argued that a ban on fracking should remain in place to protect the environment. This was said after a major report found it presented risks to water quality.

The Environmental Protection Agency (EPA) said that although fracking was possible, there was a widespread risk and further study was required before it was allowed.

Climate change and Energy Minister Denis Naughten said  the repots finding’s justified the continued ban on fracking in Ireland since 2013. The Dail has recently agreed to the permanent ban principle.

‘Yes to fracking, no to renewable energies? The need for a forward-looking U.S. energy policy’, was the headline last year from Ralf Fücks. He argues that from an international perspective “the current state of play is that the same people who readily dismiss transitioning to renewable energy technologies as a pie-in-the-sky goal celebrate hydraulic fracturing so unrelentingly”.

This is a major concern for countries such as Ireland, where although fracking is currently illegal, the lack of transparency within negotiations surrounding this topic in TTIP have been unclear. Will it be the case that ISDS judicial system may cause threat to Ireland.

Tom Healy, director of the Nevin economic Research Institute has blogged on how a “lack of transparency on TTIP is adding to a sense of unease in relation to areas such as social, environmental and regulatory rights”. It is also reported here that powerful US lobbies are indeed preparing agendas for TTIP negotiations surrounding fossil fuels.

Fracking Free Ireland makes its voice heard through its informative website. Their  primary concern surrounding TTIP negotiations is that we could be essentially forced to permit fracking regardless of Irish legislation.

McDonald also reported in the Irish Times how a similar agreement in Canadian government caused pandemonium when the government was sued. US oil and gas company, Lone Pine Research sued and with a lawsuit of a whopping $250 million.

Three “Options Licenses” were granted in the Republic of Ireland by the Department of energy and Natural Resources back in 2011. Evidence from the EPA suggesting it will have a negative impact on surrounding areas, with focus on water pollution.

These granted license permitted oil and gas companies to test the area and carry out drilling of 200 meters. Hydraulic drilling was not used then. In 2013 a ban was issued on fracking. Tamboran Resources of Lough Allen Basin and Enegi Oil of Clare basin continued to submit applications.

Having contacted the EU Commission with their concerns to “stop TTIP”, their application was rejected. The Commission claimed that they cannot comment or make any negative conclusion on the proposal. Therefore they cannot comply with the ECI demand that was made by Fracking Free Ireland. They responded by stating on their website “We believe these arguments don’t hold legal scrutiny and are politically motivated”. 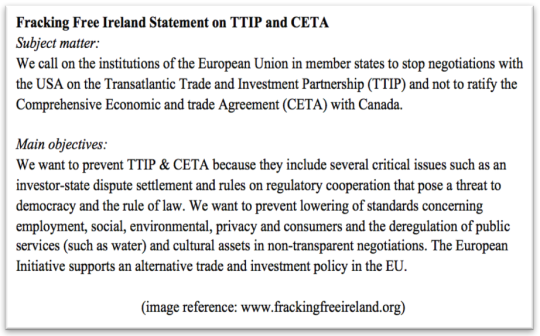 ATTAC Ireland, another opposing CSO, stated the launch of ISDS attacks on legislation could be 41,811 eligible companies. 41,811 companies who may face investor-state dispute cases by the US.

The danger of being sued under TTIP is frightening after we witnessed what occurred in Australia. This had knock on impacts seen in New Zealand and Malaysia when the Phillip Morris ISDS case appeared.

Fracking Free Ireland propose for TTIP negotiations to consider the exclusion of Investor-State-Dispute Settlements from all future investments agreements.

There are over 260 civil society organisations and NGO’s international who are opposed to TTIP. TTIP will be the largest bilateral trade initiative ever negotiated.

If you enjoyed reading this post, please check out ‘Will we see democracy in Zimbabwe’ on TheCirulaar.org