The outcry for change in the gender structures

A woman alone on a road in the night. Credit: Transformer18 (www.flickr.com/creativecommons)

For a given occasion, through discussions and debates, changes in the structures of our society are demanded.

Harvey Weinstein has triggered a debate, a debate about the handling of sexual violence in society, about the language we use when we talk about the opposite sex and also about structures and systems, in which women are exploited, abused and discriminated against. Different articles covered this topic in many different countries. The #MeToo movement has been awarded ‘person of the year’ by Time Magazine and many people are now questioning their actions in various situations. After the first waves of indignation, empathy and slander have subsided; the stronger sex now asks themselves, what else can they do to save women from the menace of everyday situations.

But this woman was scared, I got that.

Flip. “I can remember a situation where I hope I can react differently next time.” Philip*, 24, sits opposite this reporter in one of the city’s many Starbucks cafés and sips his milk coffee. “I got out of the DART, late at night. I was on my way home from my shift in the supermarket. Only one woman with me left the DART, which I did not really notice at that time. Like me, she walked up the stairs and down the other platform. We went out of the building and with me in about 10 metres distant, in the same direction into a residential area.

Only after about a few minutes, I noticed that she turned around and looked at me again and again. Our speed was the same. I had never believed that a woman would have to be afraid of me at night. But this woman was scared, I got that. It was a bad and new feeling for me. Nobody should be afraid of me.”

Philip decided to change the street and to call a friend. Loud enough for the woman to hear, he talked to his friend about the day, whether they would meet for a pint the following day, and how his daughter was. Later, when the woman turned off in a different direction, he told his friend the reason for the call.

“I told him that I did not want to make the woman feel scared of me, that I don’t want to be someone threatening. My friend laughed at me and I thought after the end of the conversation if maybe I have overreacted.”

Philip asked women from his circle of friends what experiences they had alone at night and whether they felt threatened and anxious. “Almost every woman I asked has agreed that as a woman alone in the night, it can be something scary. You feel uncomfortable and sometimes even panic when a stranger is around. That was one of the reasons why I thought I had to behave differently, so that women would not feel uncomfortable around me.” But what exactly can and should men do to help women move more freely in society?

Flip. It may not sound that important, but we should talk about language and behaviour in our culture. The uneven distribution of power in our culture, including growing dependencies, is based on how we as a society deal with sexual violence and harassment. How we speak and behave shapes the view worldwide, the patterns we perceive and think. Although it is a phrase, but still, language always forms images in the mind.

Often terms such as “sex scandal,” “sex attack” or simply perpetrators and victims are chosen by newspapers to describe situations. This contributes immensely to the structures in our society, even expanding the misogynistic structures. Thus, the concepts are wrongly conveyed, presented and perceived. There are simply no associations to shallow entertainment or voyeurism; it’s not that women are exaggerating. It is simply violence against the weaker sex and often exploited in positions of power. The tabloidization, the sexualisation and the behaviour of and by violence is a problem.

Many people think that the words “violence against women” make sexual assault and discrimination a women’s problem. But sexual violence is also a men’s problem, because violence against women is mostly male violence. Here men have the chance to fight and even fathom the origin and the triggers. What is said in our society about sexual violence usually dismisses men from their responsibility, because the debate is mostly focused on the woman and her victim role. This ensures that misogynistic structures unfold in the mind and worldwide. And this is a fact that we still talk about women, and not about men.

The outcry that is now going through all layers and countries through the #MeToo movement can only be fully effective when men now feel addressed, not only those who use violence against women, but also those which stay silent. There are those who remain silent, protect the system and the perpetrators who want to keep the women small. It would be more effective if men addressed their gender critically to situations before a woman had to do it. The power structures must change. If women also have a power position in a business, it would create an atmosphere of equality where abuse of power and traditional role allocation become rarer.

I am a man, and because through the behaviours of other men, I am the very cause of menace.

And what is about the behaviour of a man at night on the street? He needs to realise that women are often the victims of greasy start-ups, that a woman gets a slap on the butt in a pub and that they are the ones who are scared by men at night. When men are aware of this, they can respond in these situations to make women feel safe and in full control over the further course of events. One’s own behaviour can be changed, so as not to deprive others of the feeling of freedom and security. This should be a reason to strive for change.

Flip. “Definitely I’ll pay now more attention to what I say when and to whom. And if I walk alone with a woman on the same street again, I’ll get out my phone and make a call. Also, I will change the street again. I am responsible for taking the menace out of the situation. I am a man, and because through the behaviours of other men, I am the very cause of menace.”

Philip looks out of the window, lost in thought, sipping his milk coffee and putting the empty cup on the table in front of him.

*The name has been changed by the editor. The interviewee wants to remain anonymous. 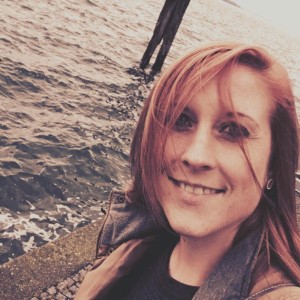