We often hear of new and innovative ways to pop the all-important “ will you marry me” question. Some people rent cinema halls, some pop the question on a romantic walk on the beach, the most common way the question is popped in at a fancy restaurant, but have you heard of an online proposal?

Yes, you read right , an online marriage proposal. Mujidat Lawal is a 22 year old Nigerian lady currently studying in Dublin, and her proposal story is very peculiar. Unlike the traditional on one knee proposal that she was expecting, she got her marriage proposal through Skype.

On the 29th of December 2018, Mujidat’s friends told her that they were taking her for a dinner party to celebrate the festive season, She was made to wear her best clothes because the supposed dinner was at a fancy restaurant.

She had planned to meet with her friends at a mutual friend’s apartment, so they would all go from the apartment to the diner . On getting there,  to her greatest surprise, she saw rose petals on the floor , lit candles in the shape of a heart and there was even a saxophonist in the corner playing her favourite songs.

As expected, her first words were, what is going on here? And her next question was, is this for me?, when she looked across the room she noticed her boyfriend looking at her through Skype. She screamed in amazement.

She moved closer to the laptop to ask him what the celebration was for, when she noticed he was on one knee and at that same moment, her sister ,who had planned the whole thing with Mujidat’s boyfriend and her friends, presented the ring to her as he said “Mujidat will you marry me?”.

She was lost for words for a moment but after a few seconds she screamed “YES”. Mujidat says  the proposal was completely unexpected because she had planned to go to Nigeria to pay him a visit during the summer of 2019, and she expected him to pop the question then.

According to her, he said he could not wait anymore and he wanted her visit to be spent planning their wedding.

Mujidat added the proposal was still very romantic because of how well put together it was, and she would advise anyone in a long distance relationship looking to settle down with their partner to consider an online marriage proposal. Plus what better way to have the surprise element than to hide in plain sight. 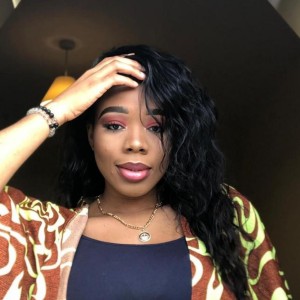