The appeal of Animal Crossing – A subtle recommendation

How this life simulation game is captivating its audience

To give you a good feel for what we’re about to dive into, you might want to tune into this piece or this playlist on Spotify while reading the article.

If you haven’t ever heard of Animal Crossing, there are two ways to describe this game. You could portray it as a simple life simulation which lets you build a town, your house and pay back a mortgage to a greedy racoon. There is, obviously, a better way to explain it.

Animal Crossing is a game allowing you to tune out from the stress in your daily life and be part of a community without the expectations society usually has.

Based on its graphics it might seem like a children’s game but essentially, Animal Crossing lets you be an adult – with all the advantages and none of the responsibilities (besides paying back a loan with no interest or time limit). There is a good reason it is one of the most successful franchises by Nintendo.

With the first Animal Crossing released in 2001 in Japan on the Nintendo 64, Nintendo created a game that did not quite fit into any genre. Katsuya Eguchi, game designer and creator of the series, explained in an interview with Nintendo Europe that for the initial release, they were worried whether players would understand the game. Unlike many other life simulations, Animal Crossing does not expect you to reach a goal.

You as the player are entirely free in your decision making and the way you spend your time. Currently, there are four games, three spin-offs and a fifth game to be released in March. The series developed over the years. The graphics became better, new villagers were added and new features introduced. But the basic idea of the game stayed the same.

You arrive in a small town with nothing but yourself and the freedom to do whatever you like. Depending on which game you play, you might be greeted by Isabelle, a friendly dog-like character, showing you around and making sure you introduce yourself to everyone. As you need a place to stay, Tom Nook gladly offers you a house – or rather a tent – and a way to earn some money.

Yes, you might be stuck with a mortgage now, but there is no interest and it does not matter how long you take to pay it back. If you like, you might live in a tent for the entirety of your gameplay. You meet your fellow villagers, each with their own personality, as well as characters with more significance to the gameplay like the Museum director or the owner of the local coffee shop, Brewster.

As the time in the game is linked to the time on your system you not only experience day and night time but seasons as well. Over the year you are able to experience Toy Day (Christmas), the cherry blossom festival and a variety of other events and celebrations.

The villagers and characters in your town are part of what makes this game as much of an experience as it is. You develop bonds, get to know their habits, likes and dislikes. If you want, you might take the opportunity to listen to K.K. Slider playing one of his songs on a Saturday night while you enjoy the cosy atmosphere of the local cafe.

For the upcoming game “New Horizons”, Tom Nook invites the Player to take part in his “Deserted Island Getaway Package”. The character took over the official animal crossing twitter page to inform players about the newest developments. The game introduces a few new features to the series but overall sticks with the cosy, welcoming atmosphere of its predecessors.

By the way, has everyone seen today's Nintendo Direct with my special movie, Deep Dive into Deserted Island Life? We shared a lot of details about the getaway package, so if you haven't watched it yet, please go check it out, hm?https://t.co/brjfxLU1FQ pic.twitter.com/G7Y9fNBfux

It is difficult to explain just what is so appealing about this series. The activities might not seem interesting, mundane nearly. Catching fish and bugs, digging up fossils or talking to your villagers – all things that seem to be more of a waste of time rather than a fun activity. But this slow pace and the fact that you do not have to be the hero who saves the town but just exist is exactly what draws most players in. You get a sense of community and belonging into the town.

This new city that in reality would seem intimidating does not put you under any pressure. You can’t really do any damage or hurt yourself but are able to enjoy the accommodating and open atmosphere. The player is able to shape their community and work together with their fellow villagers to create a place for their own. Obviously, there is a degree of imagination necessary.

You are free to choose your focus. Maybe you want to complete the Museums collection or expand your house. You could focus around building your town around a theme or simply enjoy the atmosphere and chat to your neighbours.

Video games, in general, can teach us a lot. Animal Crossing is one of those games, that makes it surprisingly easy to tune out and slow down life for a bit. If you happen to have a switch or an old Nintendo console at home, maybe take up the opportunity and look into this series. Do you have any go-to games you pick up when you try to tune out? Let us know in the comments. 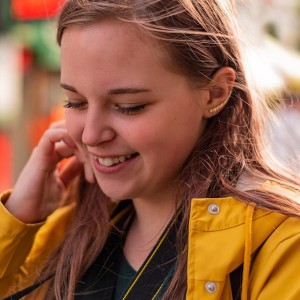 A German-based Journalist currently completing her Master at Griffith College in Dublin. While first acquiring a degree in Media Design, she fell for writing and the journalistic profession during the time in Dublin.
All Posts