Medals Over Morals: Culture of Abuse in Gymnastics

Image by Ania Klara from Pixabay

At the 2016 Rio Olympics, Ellis O’Reilly became the first female Olympic gymnast to represent Ireland. After performing decently on vault, floor and bars, she knew it depended on beam to achieve a good all-around score. O’Reilly’s beam routine was solid, albeit a few wobbles here and there, but when a slip of her footing on the dismount caused her to land on her head, O’Reilly’s Olympic dream was over.

Ireland isn’t well known for Olympic level elite gymnasts so despite O’Reilly not placing, those involved in the sport were really proud of her. Female gymnasts begin young, often at 4 or 5 and retire in their early 20s as the sport is very demanding on an athletes body. Despite being only 22, O’Reilly has already been retired 4 years but she came forward to speak about health issues and emotional abuse she endured when competing in the sport.

“It makes me really upset that yeah, it was great. I got to the Olympics, but at what cost? I now have health problems from it, I now have a lot of health problems from the sport. I suffer back pain still,” O’Reilly told ITV news in an interview this July. Teary eyed, she asks to stop the interview so she can collect herself. Europa Gymnastics centre in Crayford, U.K. was O’Reilly’s primary training facility and like most elite gymnasts, she trained hard constantly. A sport that often encourages its athletes to train despite injuries, she claimed that at Europa Gym she took double doses of prescription-only pain killers everyday in order to deal with knee, wrist and back pain. “I would finish a training session, come home and just lay on the floor and cry in my kitchen for about half an hour, until I could physically get myself up to go and have a shower to go to bed.”

Returning from Rio, a scan showed that O’Reilly’s fall had broken her neck and that she’d been competing with three back fractures. She was warned that if she continued gymnastics she would have health conditions for the rest of her life and another major fall would most likely paralyze her. On top of that, online hate comments added to her development of seizures. She told ITV News, “A lot of stress, anxiety, fear over the years, everything that had built up and the seizure was the only way that my body could release it.” Occasionally O’Reilly trained in Ireland but thankfully had positive experiences with Gymnastics Ireland. “I always felt like I was an asset to their team and they welcomed me with open arms and made me feel comfortable. Whatever I needed, it was never a problem and I always experienced the utmost care and attention from them.”

ITV News has uncovered and compiled a catalogue of allegations of physical abuse, mental abuse and bullying across British Gymnastics. Olympians Ellie and Becky Downey released statements on Twitter July 9th, 2020 detailing how abusive behavior is normalized in gymnastics. Ellie spoke about the pressure to diet constantly and wrote that she “vividly recall[s] being told as a young teenager at a national camp to lose 6kg in two weeks or ‘there would be consequences’”. This tweet prompted an investigation into a complaint about an English Institute of Sport (EIS) nutritionist who allegedly weight-shamed Ellie.

The nutritionist was suspended while the allegations were looked into but that suspension has now been lifted. In a statement to ITV News confirming that the complaint had not been proven, EIS said: “All relevant individuals were interviewed by a senior EIS member of staff and the subsequent report was submitted for a full review to an external independent investigator, who has experience of investigations within high performance sport. The conclusion from this process is that the complaint was not upheld.” Outcomes like this are worrying the wider gymnastics community that other gymnasts with less of a platform may be scared to come forward with allegations of abuse.

It’s not just British Gymnastics that is trying to create a new encouraging atmosphere where allegations of abuse are taken seriously. Hundreds of American gymnasts and other athletes stood on the 2018 ESPYS Award show stage to accept the Arthur Ashe Award for courage after testifying against former team doctor and sexual abuser Larry Nassar. USA Gymnastics and Michigan State University employed Nassar for decades but when former patients came forward to make complaints against him, USA Gymnastics and Michigan State University ignored victims again and again. Some of the most famous Olympic gymnasts today like Simone Biles and McKayla Maroney were victims at the hands of Nasser. More than 150 women made impact statements describing the torture and guilt they felt all these years at the week-long sentence hearing, outnumbering the alleged victims of Harvey Weinstein and Bill Cosby combined.

Accepting the Arthur Ashe Award for courage, Aly Raisman spoke on behalf of all abused by Nasser:

But we persisted, and finally, someone listened and believed us. This past January, Judge Rosemarie Aquilina showed a profound level of understanding by giving us each an opportunity to face our abuser, to speak our truth, and feel heard. Thank you, Judge, for honoring our voices. For too long, we were ignored, and you helped us rediscover the power we each possess. You may never meet the hundreds of children you saved, but know they exist.”

British Gymnastics has suspended 11 people including Europa Gym Centre’s managing director Len Arnold, his former Olympian wife Yvonne, Ellis O’Reilly’s former coach Samantha James and business development manager Emma Sheriff. It was unknown if the suspensions related to the QC-led independent review into allegations of abuse. When asked by ITV News to comment, Mr. Arnold, on behalf of Europa Gym centre, commented that they denied “any wrongdoing or impropriety.” Part of a statement from the Europa gymnastics club read “The welfare of children is always of paramount important to us, we were therefore shocked and saddened to hear these claims. We have always sought to place the welfare of gymnasts at the heart of what we do.”

British Gymnastics’ chief executive Jane Allen announced she will retire in December amid mounting allegations of bullying and toxic abuse within the sport. Allen said she will “look back on my time with British Gymnastics with great pride for the growth and success we have sustained over a ten-year period”. British Olympic gymnast Francesca Fox says that Allen should ‘take responsibility’ in a video on ITV News’ website. A confidential gymnastics abuse helpline was set up by the NPSCC and British Athletes Commission (BAC) to encourage gymnasts to speak about their experiences. After only 5 weeks of operating, over 120 calls were made to the helpline.

Gymnastics’ open secret of abuse has been ignored for so many years that inevitably the floodgates have come crashing open. Thanks to the bravery of gymnasts like Ellis O’Reilly, Ellie Downey, Aly Raisman and many more, physical and mental scars left from this challenging sport, a future generation of gymnasts can hopefully train without intimidation. They were ignored and failed by their sport. The future of gymnastics, with these young women leading, looks strong. But we owe it to these athletes, ourselves, to speak up and listen in order to make gymnastics safe for everyone.

If you have been affected by any issue raised in this article contact: 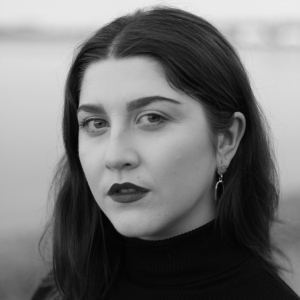 Ash Potter is a student journalist who has hosted Fully Dressed on Dublin City FM, interned for Newstalk for Political coverage, produced features & was the photo editor for the Student Media Awards 2020 nominee DUB8 magazine. She also writes for online Japanese street fashion magazine, The COMM. She writes opinion pieces, reviews, and showcases her portfolio on her blog which was in the top 5 nominees for ‘blog of the year’ at the Student Media Awards 2020. Ash also uploads her radio, documentary, and film portfolio to her Youtube Channel.
All Posts