The pain of moving home is something most people will have lived through. The packing, the loading, the endless searching for that thing you know you’ve forgotten but can’t quite put a name on. This particular pain looked like it could topple FC Shakhtar Donetsk into the abyss before the 2014/15 season even got underway. Following a friendly in France last July, six Shakhtar players refused to return to the Ukraine due to concerns for their personal safety.

Included in this group were Douglas Costa, Fred and Alex Teixiera.  Worryingly for the Ukrainian giants, this core of Brazilian talent represents a significant portion of their starting eleven. Shakhtar are a club renowned for bringing in South American stars and in another Brazilian, Luiz Adriano, they boast the current top scorer in the Champions League.

The War in Ukraine is centred in the Donbas region of Eastern Ukraine. This region incorporates both the Luhansk and Donetsk areas, the latter being where FC Shakhtar are based. Armed conflict has been taking place since early 2014 between pro-Russia separatist forces and the Ukrainian government, and this conflict has driven the football club from their home.

Torn from the majestic Donbass Arena, one of the Champions League’s mainstays now play their home games 600 miles from their stadium in the western city of Lviv. Shakhtar Donetsk is a club in turmoil having been forced to evacuate from the warzone the Donbas region has become. Despite this, the club have coped remarkably well in European competition in the midst of such a difficult situation.

Despite a 7-0 second-leg drubbing at the Allianz Arena, qualification from the group stages of the Champions League and a subsequent scoreless ‘home’ draw with Bayern Munich represents a successful campaign for Shakhtar. This result was quite remarkable considering it was Donetsk’s first competitive game since December due to their league’s winter break.

The club’s form in the Ukrainian Premier League is not quite living up to expectation. Having won the competition for the last five years running, the Miners lie five points adrift of Dynamo Kyiv with 6 games left in the season. Not playing at the Donbass Arena is clearly having an impact on the reigning league champions. It’s no surprise that a club which has lost such a considerable percentage of its home support is showing signs of ill-effect.

The Donbass Arena itself has suffered heavily as a result of the conflict in the region. The 52,000-seater stadium, once the crown jewel of Shakhtar’s empire, has been the recipient of severely damaging artillery shelling emanating from clashes between the Ukrainian army and pro-Russia separatists. It represents a marker of how long it may take for the club to return to its home, if that day ever arrives.

While the absentee players did join up with their teammates a week later, the entire episode does not bode well for the currently exiled Shakhtar. They have a history of selling their top talent. The sale of Brazilian duo Willian and Fernandinho in 2013, along with the move of top league scorer Henrikh Mkhitaryan to Dortmund in the same year, is representative of the club’s transfer policy. Douglas Costa was heavily linked with a move away from the Ukraine last summer; while Luiz Adriano’s eye-catching European exploits have put many big clubs on alert.

The worry for Shakhtar is that their ability to attract new talent to the club will have been severely diminished by the situation in which they now find themselves. No footballer will want to ‘move home’ to the Ukraine considering the club is currently uprooted from its own headquarters. Barring a complete disaster in the final stage of the league season, Shakhtar will still be able to offer Champions League football to potential stars that may not yet be on the radar of Europe’s elite.

However, one must consider this attraction with a healthy dose of scepticism. Most professional football players don’t lead ordinary lives, but their lives still include ‘ordinary’ aspects. They have families, wives, partners, children, even pets. They have their own safety as well as the safety of others to consider. Like any ordinary person, they would prefer not to live in a war-torn country.

Coupled with the fact that these professionals are used to a certain lifestyle and level of comfort, it seems dubious that even the allure of playing in Europe’s most vaunted competition could convince players to sign a contract with a club in such distress. Should the club suffer an exodus at the end of the season, it will struggle badly to replace its current crop of South American players.

“It’s a difficult situation,” Shakhtar captain Darijo Srna told World Soccer in November. “However, we want to return to Donetsk as soon as possible. We want there to be peace in Donetsk, we want to play in the Donbass Arena in front of our fans. On the day the war ends we will return to Donetsk and kiss its streets.” 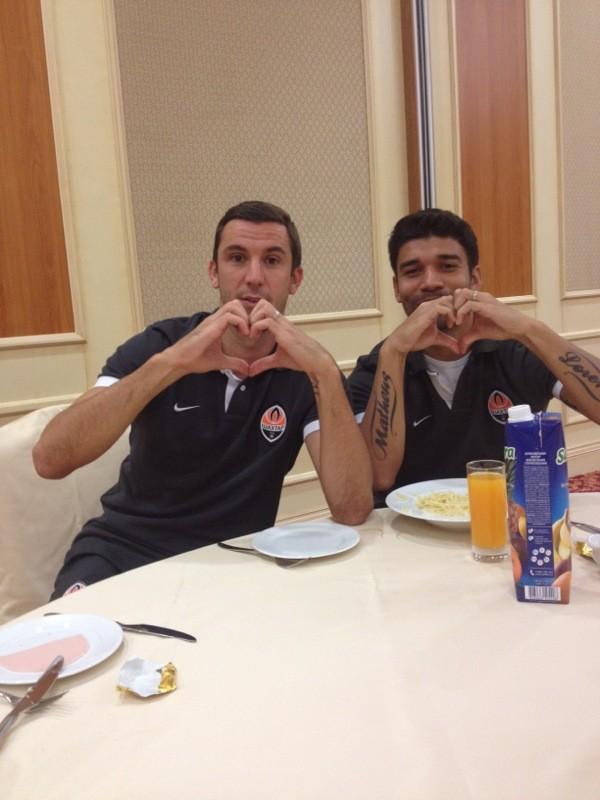 This clear level of pride held by the Shakhtar legend in his club (showing his love in the above picture posted on Twitter) and his region seems unlikely to be replicated by his teammates, judging by last summer’s no-show. The club’s identity now hangs in the balance. Their forced exit from the Donbas region has been compounded by claims from separatist leader Konstantin Dolgov that FC Shakhtar will never return to Donetsk. In the same month as Srna made it clear the club was intent on moving home, Dolgov was quoted as calling for the formation of a “People’s club” to replace them.

Shakhtar’s long-term existence is in sincere jeopardy. Should Darijo Srna ever return to lay his lips on the cracked streets of Donetsk, he may find himself alone as he enters the shattered Donbass Arena.