A Pandemic, a war and avocado toast

The history books of the year 2090 will have thick dedicated chapters for 2019-2022, these chapters will feature a worldwide pandemic originating from a bat in a Chinese wet market, a two year lockdown, swiftly followed by the first potentially global war in Europe since WWII. Add in a backdrop of spontaneous wildfires and the declining health of our planet and it makes a grim read.

Future students might turn these pages in disbelief mixed with the indifference that the buffer of time brings, they might even feel a faint sense of relief it wasn’t them. When I learnt about the Black Death of 1347 in school, it resembled a ghost story  – frightening but unrelatable and beyond the realm of possibility for *my life*.

When the syllabus got to Anne Frank’s diary, my naivety balked at how these events could have transpired – instinctively reassuring myself that I had won the genetic lottery in being born when and where I was (Northern Ireland in the 90’s was no paradise but compared to the history books I considered myself pretty lucky).

The thing is, most of us believe our time on this earth is the greatest time to be alive, we look at centuries gone by grateful we weren’t there, because the natural order of things is that we are constantly innovating, improving, living better/longer lives.

The school children of 2090 may well wonder how we managed to live our lives, the way I do when I open a dusty history book, luckily for them, what marks us out from previous generations is our predilection to constantly share and demonstrate our lives.

For whatever reason, danger on a worldwide scale always seemed pretty implausible in today’s world of unbridled consumerism – next-day delivery, €12.99 flights, doorstep sushi in under 30 mins, swipe up, buy now & pay later – you name it, you got it.

Live CNN footage of Kyiv under attack was simultaneously accompanied by an Applebee’s advertisement featuring a twerking cowboy on a split screen in the U.S. last week, the transition of air-raids into beer and fried chicken served as an uncomfortable illustration of the paradoxical society we live in.

What the past couple of years has shown is that, despite the trappings which lull most of us into a false sense of security – we aren’t beyond the dark days of the history books, a vast amount of the world has never come close to being beyond it.

Viral news reports questioning how war could happen ‘in Europe!’, in what one reporter called ‘a relatively civilized’ country, beyond the overt racism, also ignores the fact that the fundamentals of geopolitics (power hungry warlords aren’t extinct) haven’t changed, the human condition to seek protection, comfort and distraction has not changed.

My nine-year-old self wondered how Anne Frank could bring herself to write every day in her diary, to speak of such repugnant things so normally and calmly.

I’ve since realised it’s the same reason a soldier takes time to record an amusing TikTok in a perilous situation, the reason memes are so prolific in a time of crisis – distraction, a slither of normality and a reminder that despite it all we’re still here – at this point in history, right here and right now. 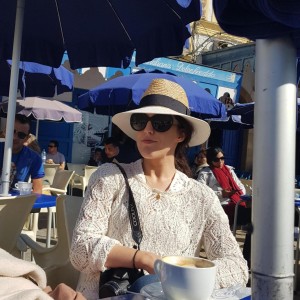