Streaming is a form of digital distribution, in which information is not stored on the user’s device (such as mobiles and computers), helping one save a lot of GB on their phone.  It is a form of user-generated content without violating any copyrights. 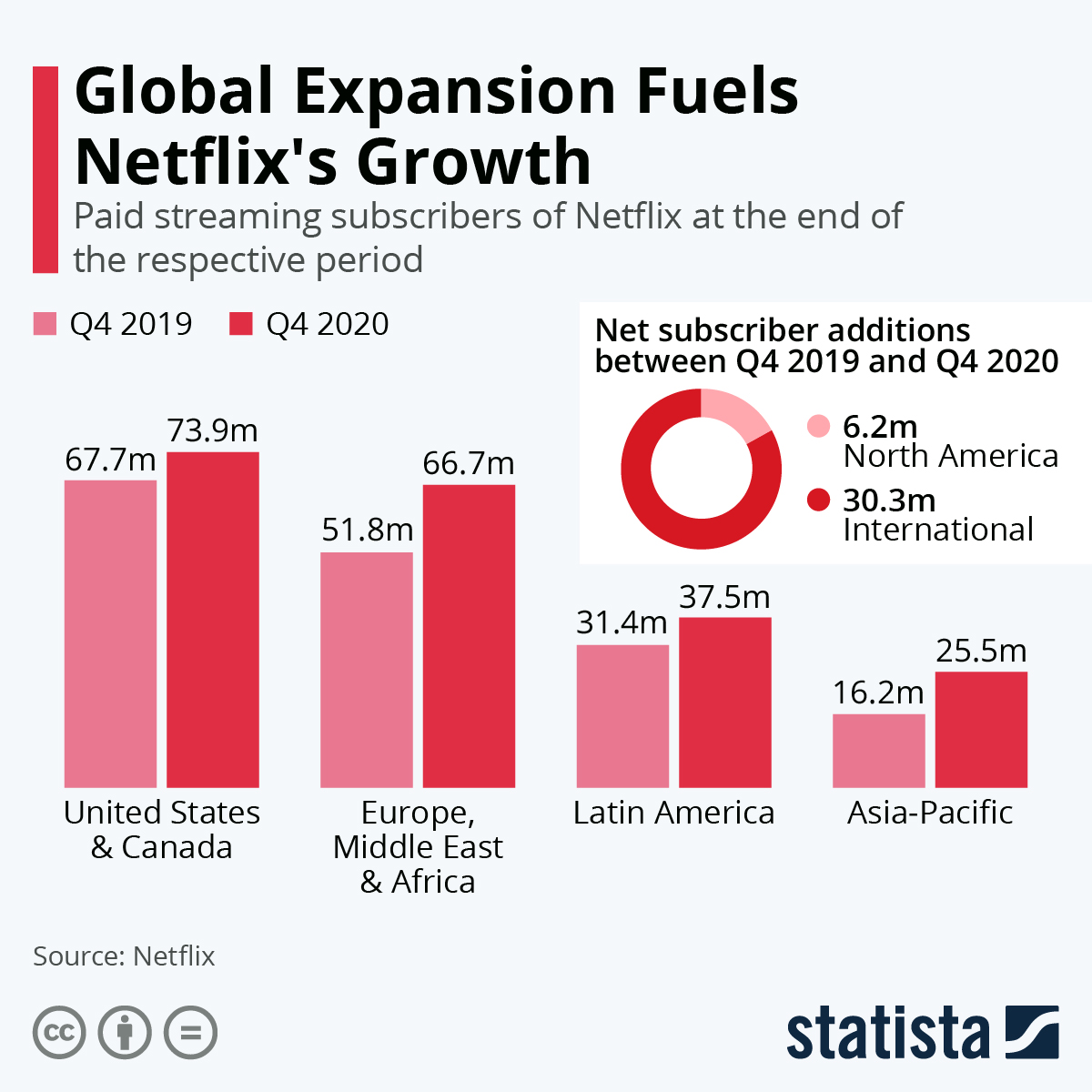 You will find more infographics at Statista
netflix by bahaar thareja

Netflix is the world’s leading internet entertainment service with over 158 million paid memberships in over 190 countries enjoying TV series, documentaries and feature films across a wide variety of genres and languages. Members can watch as much as they want, anytime, anywhere, on any internet-connected screen. Members can play, pause and resume watching, all without commercials or commitments.

Reed Hastings and Marc Randolph founded Netflix (formerly known as Kibble) in 1997, the company started off as a DVD rental service. Shocking, right? Nowadays, Netflix has become one of the biggest TV and movie studios in the world, with more subscribers than all the cable TV channels in the USA.

Hastings saw his company’s future as providing streaming video delivered to subscribers via the internet, even though Netflix at the time made its money by mailing DVDs to subscribers across the country.

1997 was the year Netflix launched with a video library of approximately 900 titles, with a 7-day maximum rental policy. By April 1999, Netflix’s video library expanded to 3,100 titles. Rentals initially used to cost just 50 cents each. By January 2000, Netflix’s catalog reaches 5,200 titles.

Netflix CEO Reed Hastings came up with the idea after getting socked with a late fee for a movie rental at Blockbuster Video. Hastings was inspired to create a service without late fees and used the money he received from the buyout of another software company to fund the venture.

Netflix launched its first DVD rental service in 1998 and still has about 4 million subscribers. Netflix is the largest source of internet activity. According to rough estimates, it accounts for roughly one-third of total internet traffic during peak usage periods.

It is estimated the average Netflix subscriber streams about 90 minutes of content every day. Given the number of subscribers who stream content daily, over 1 billion hours of content are streamed per week.

Netflix offers a huge number of Films and Tv shows that the company produces, including series such as “Orange Is the New Black” and “GLOW.”

There is one thing that you don’t know about Netflix yet , they tested various video formats before the programs started streaming.

However, the company was testing out video formats and capabilities long before any of those programs hit the streaming service

In October 2019, it had over 151 million paid subscribers in over 190 countries around the world. It offers a wide range of TV series, documentaries, and feature films across a wide variety of genres and languages.

“In 2000, Netflix CEO and co-founder Reed Hastings approached Blockbuster about a partnership. Unfortunately for Blockbuster, their CEO just smiled and laughed at him.

2007 saw the growth of  Netflix that included introducing streaming, which allowed members to instantly watch television shows and movies on their personal computers. In the following years, Netflix partnered with consumer electronic companies to stream on Xbox 360, Blu-ray disc players, set-top boxes, smart TVs, PS’3 and all electronics/devices that would need internet.

With 2010 rolling in, Netflix became available on iPad, iPhone, iPod, Nintendo Wii and launched in Canada followed by Latin America, Caribbean, Europe and won its first Emmy in 2012. 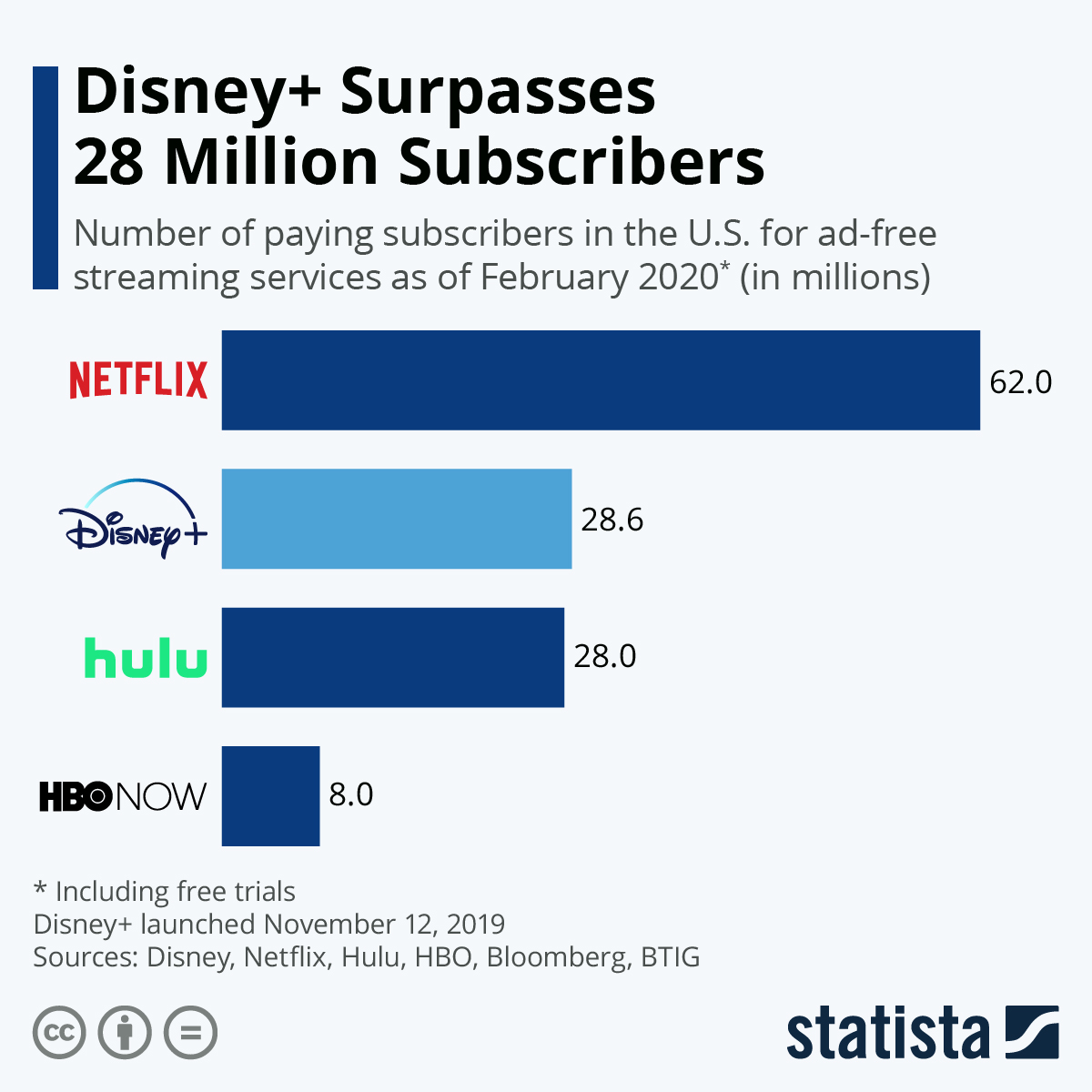 You will find more infographics at Statista

In 2013, Netflix received 31 primetime Emmy nominations including outstanding drama series, comedy series and documentary or nonfiction special for “House of Cards”, “Orange is the new black”, and “The Square” respectively. House of Cards won three Primetime Emmy Awards. Netflix was the first internet TV network nominated for the Primetime Emmy. In 2014, Netflix was launched in 6 new countries in Europe (Austria, Belgium, France, Germany, Luxembourg, and Switzerland). Netflix now has over 50 million members globally. 2015 was the year the popular streaming service in Australia, New Zealand, and Japan, with continued expansion across Europe in Italy, Spain and Portugal. The first Netflix original feature film “Beasts of No Nation” was released.

Netflix became available across the globe in 2016.